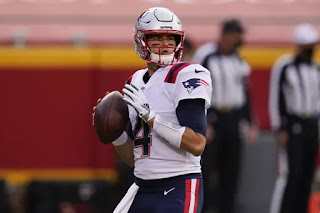 (Jeff Roberson/Associated Press)
Jarret Stidham was believed by everyone to be the heir to Brady, and even the Patriots themselves stressed how Jarrett was the starting quarterback of this roster over the summer.
Well, we all know that narrative changed once the Pats signed Cam Newton.
And still, even with Newton out las tweek against Kansas City, the guy this team made out to be their new poster boy didn't even get the starting gig.
Long time vet Brian Hoyer got the nod, and well, he disappointed. Multiple turnovers and zero awareness resulted in only 3 points at halftime and turnovers inside the red zone.
The Pats saw enough and turned to Stidham. He provided a jolt of energy early, connecting with N'Keal Harry for a stellar touchdown, the first of his career.
Stidham finished with a line of 5/13 for 60 yards, 1 touchdown, and 2 picks. One of those picks was completely not his fault.
I think we can all agree that if Cam played this game, the Pats would have easily won, and it would have been a huge victory. I'm also confident in saying that if Stidham started out of the gate, we definitely would have had a  better chance as well.
Twitter and Instagram @NickRufo21