Patriot Performers of the Game (Week 6) 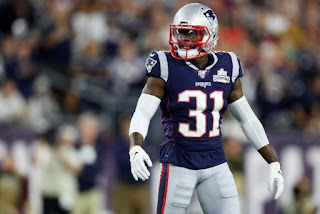 (Maddie Meyer/Getty Images)
The Patriots fell to the Denver Broncos this Sunday by a score of 18-12.
New England lived up to its "bend don't break" mentality to the fullest today, allowing only 18 points, which all came from field goals on Denver's side.
Unfortunately, the offense couldn't produce enough points to pull a victory out of this defensive battle.
This game was filled with turnovers and ugly play. But, there was some highlights on both sides of the ball.
Cornerbacks J.C. Jackson and Jonathan Jones both made consecutive interceptions in the fourth quarter to give the Patriots some life and a chance to win the game.
James White was a valuable asset in his first game back with 8 catches for 65 yards.
Cam Newton struggled in the air with two interceptions today, but dominated on the ground with 10 carries for 76 yards and a touchdown. He kept plays alive on multiple occasions by shrugging off and stiff arming huge hits.
The Patriots top tacklers on the defensive side continued to dominate. Ja'Whaun Bentley and Adrian Phillips recorded 12 and 11 tackles, respectively. The pair each had 2 tackles for a loss as well.
The Patriots look to get healthy and get back in the win column next Sunday against the Niners.
Twitter and Instagram @NickRufo21