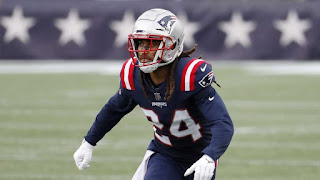 Patriots star cornerback Stephon Gilmore has tested positive for coronavirus, reports say.
First reported by ESPN and NFL Network, Gilmore is now the third Patriot to contract the sickness.
This could have easily been prevented. The game on Monday night definitely should not have been played at all. It should have been postponed until a later date just like the Titans and Steelers game once they found out that Cam Newton tested positive.
Completely irresponsible move by the NFL, who seem to be losing their grip on this virus situation across the league. There is already a handful of teams infected, and it will continue to spread. I can assure you Gilmore is not the last player that you will hear that tests positive from who played on Monday night.
If the Patriots game stays on schedule for Suinday at 4:25, they will be without their best players on offense and defense, and have a tough task ahead of them, even against a mediocre Broncos team.
Twitter and Instagram @NickRufo21