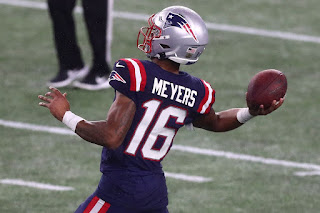 (Adam Glanzman/Getty Images)
The Patriots pulled some trickery out this past Sunday night with a designed double pass that led to wide receiver Jakobi Meyers, who played quarterback in high school, connecting with running back Rex Burkhead in the endzone for the go ahead touchdown against the Baltimore Ravens.
This was not the first time the Ravens had seen a play like this come from the Patriots. Julian Edelman did so against Baltimore back in 2015 in the playoffs.
https://www.youtube.com/watch?v=bvS9fYHBRvo
The Ravens were just as stunned Sunday as they were 5 years ago.
Twitter and Instagram @NickRufo21