Patriot Performers of the Game (Week 11) 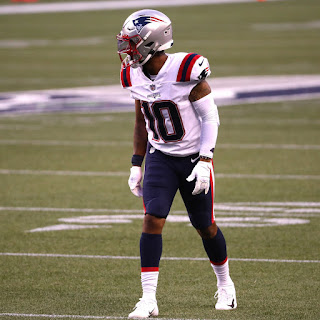 The Patriots lose another nail biter to the Houston Texans and fall to 4-6 on the season.
This team continues to perplex me. it seems as if they can contend with or beat teams who are better than them, but crumble to inferior opponents.
On the season we know the Patriots could have beaten and lost by 1 possession on the last play of the game to the 7-3 Bills and 7-3 Seahawks. They beat the 6-3 Ravens last week as big underdogs, and also have wins against 6-3 Dolphins and 6-3 Raiders. But on the other hand, they have lost to the 3-6 Broncos with a backup quarterback and 4-6 Niners prior to the loss today to the 2-7 Texans. Shit just doesn't add up this year.
Anyways, Damiere Byrd was the highlight of today's game with his first breakout performance of his career. He finished with 6 receptions for 132 yards and a touchdown on a beautiful over the shoulder grab.
Newton didn't have a bad game, throwing for 365 yards which is unlike him.
Damien Harris continues to be an RB1 with a solid performance of 11 rushes for 43 yards and the first touchdown of the game on the opening drive.
James White also pitched in 83 all purpose yards on 11 touches.
If the season continues to progress the way it has all year, the Patriots should dominate the 6-4 Cardinals next week.
Twitter and Instagram @NickRufo21