Patriot Performers of the Game (Week 12) 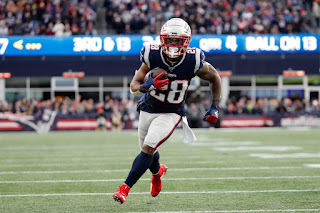 (Winslow Townson- USA Today Sports)
The Patriots improve to 5-6 after a buzzer beater field goal to win 20-17 against the Arizona Cardinals.
If you check my recap article from last weekend, I predicted this win, because in Patriots form, they win a game they aren't supposed to.
What I mean by that is that they play up to their opponents, beating teams better than them on paper and who have better records, and lose to teams with worse records.
The loss last week to the then 2 win Texans is sandwiched between wins against the then 6-4 Ravens and the 6-4 Cardinals. The Ravens boast last year's MVP Lamar Jackson, and the Cardinals have MVP front runner this year, Kyler Murray.
As stated last week, 4 of the Patriots now 5 wins are against teams with positive records, and 3 of their losses are against teams that are sub .500. This team just simply does not make sense.
Anyways, the offense was headed by running backs James White and Damien Harris today. White scored both touchdowns for the Pats today. Harris led the team in rushing attempts with 14 and kept drives progressing with multiple first downs.
Same goes for Jakobi Meyers, who led the team in all receiving categories and had multiple huge pickups.
The defense kept us alive for a lot of the game. Winovich had 5 tackles and 2 batted passes,, 1 of which launched the ball in the air and allowed Adrian Phillips to intercept it.
The real highlights and most important plays of the game came from the special teams. New member of the Patriots Donte Moncrief returned a kickoff past the 50 yard line and set up a Patriots score. Punt returner Gunner Olszewski took one back to the house but was negated by an absolute bullshit penalty by the blind refs. He still deserves credit and recognition for the highlight play though.
And lastly of course, the most important play of the day was kicker Nick Folk's 50 yard game winner as time expired.
The Patriots travel west for a matchup with the LA Chargers next week, and if the theory proves right, they are in store for a loss.
Twitter and Instagram @NickRufo21