Patriot Performers of the Game (Week 8) 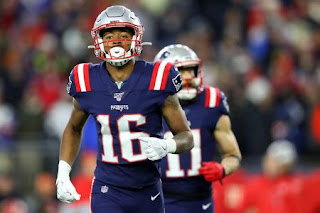 (Maddie Meyer/Getty Images)
The Patriots came into Buffalo this Sunday as underdogs for the first time in multiple decades agaisnt the Buffalo Bills.
The Bills defeated the Patriots 24-21 on a last play heartbreaker when Cam Newton fumbled in the redzone with 30 seconds left.
Although this loss presumptively ended the Patriots season and their chance at contending, they looked really really good in the second half. If it weren't for the heartbreak at the end, I believe the Pats could have used that momentum to turn their season around and go on a big win streak.
Damien Harris started the second half jolt with a long 30 yard touchdown run for the Pats first touchdown of the game. He finished with with 16 attempts for 102 yards. The young back could be a very important piece in the Pats offense for years to come.
The Patriots came into todays game with a rag tag group of receivers. With top two receivers Julian Edelman and N'Keal Harry inactive with injuries, Jakobi Meyers and Damiere Byrd led the group today. Meyers was Newton's safety blanket all day. He caught 6 passes for 58 yards and had double digit targets. He also caught a two point conversion. Bird chipped in 3 for 39 yards.
Rex Burkhead didn't do much in the stat sheet, be he deserves to get recognition for two runs of his that were crucial on third down and helped the Patriots keep drives going.
The defense was lackadaisical and couldn't figure out how to tackle. J.C. Jackson got yet another interception and continues to be one of the league's best corners. Rookie Josh Uche also came up clutch with multiple third down tackles and tackles for losses in some of his first action all year.
It's very hard to get excited about such a depressing season, but I'm glad the Patriots showed life today and put up a great fight. They travel to MetLife next Monday night for a matchup with the league's worst team, the winless Jets. This SHOULD be a solidified win already. Let's pray.
Twitter and Instagram @NickRufo21