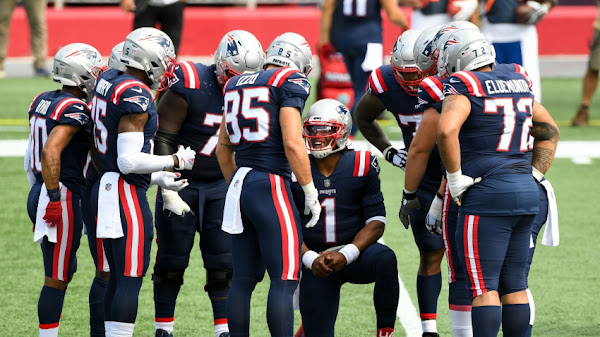 NBCBoston The Patriots lost thier second straight game and will end their season with a losing record. The Patriots lost to the Bills on Monday night football 38-9. Their offensive struggles have been hard to watch all season. Starting with a dropped pass by Damiere Byrd, tonight wasn't any different. Cam played a decent first half tallying a nice rushing touchdown, however he was not great and Jared Stidham came played the second half. Jared Stidham led the Patriots in passing going 4-11 for 44 yards. Sony Michele led the Patriots in rushing with 69 yards on 10 carries. Jakobi Meyers led the Patriots in receiving with 45 yards and four receptions. Josh Allen led the Bills in passing going 27/36 passing for 320 yards and four touchdowns. Zack Moss led the Bills in rushing going for 57 yards on 12 carries. Stefon Diggs led the Bills in receiving with 145 yards on nine receptions and three touchdowns. Try to blame Cam Newton all you want, but he has no weapons. Has Cam been perfect this year. Absolutley not. Hes been good. He's had some bad moments and he's also had great moments. His touchdown tonight was a great moment. It was vintage Cam. Cam's biggest problem this year has been his lack of offensive weapons. I love Jakobi Meyers but he is NOT a number one receiver. Or even a number two receiver. Losing Edelman was tough, too. Sign Cam to another vet minimum year, use that 51.4M cap space, and get some solid receivers and allow the current QB room to work their magic. Maybe the Patriots brigade comes for me tonight maybe not. Im talking to you PatsGazette, Jeff Howe, and Ian Brown, you clowns. You guys embarrass the Patriots fanbase every week with you god awful takes. Follow me on twitter: @nicseeley12 Or tell me why I'm wrong.