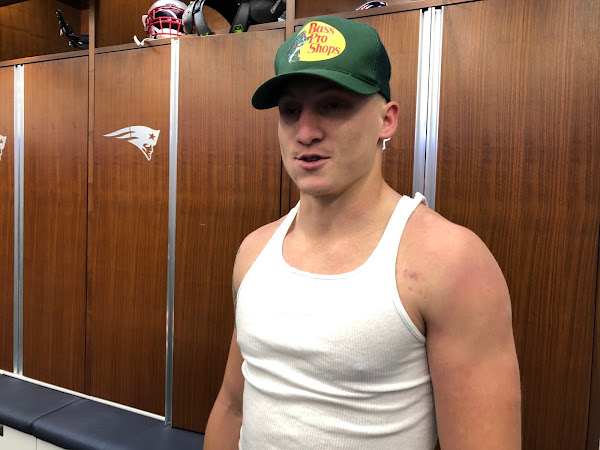 Ryan Hannable/ Twitter Second year Patriots wide receiver and special teams specialist, Gunner Olszewski, has been named AFC Special Teams Player of the week. This honor comes after having a 70-yard punt return for a touchdown, a 61-yard punt return, and a 14-yard punt return in the Patriots 45 point shutout against the Los Angeles Chargers. Gunner also posted a 38-yard touchdown catch from Jared Stidham late in the 4th quarter. Patriots Coach Bill Belichick had high praises for the second year player from division two. “Gunner’s worked extremely hard and overcome a lot,” Patriots coach Bill Belichick said after the Chargers game. “He’s not a big guy, but he’s got a big heart, and he plays hard.” This big week came after he got robbed of a touchdown last week against the Cardinals. Olszewski had an 82-yard punt called back after a horrendous blind-side block call. Olszewski spoke about that play as well. “It ain’t our fault the first one got called back. The game’s getting soft,” he said with a grin. Gunner is quickly becoming a great special teams player and could have the ability to change games like Matthew Slater has done in the past. Ohh... and one last thing. When mentioning Gunner's great game last week, DONT YOU DARE FORGET THAT THE MAN HAD A TACKLE. Follow me on twitter: @nicseeley12