Patriot Performers of the Game (Week 13) 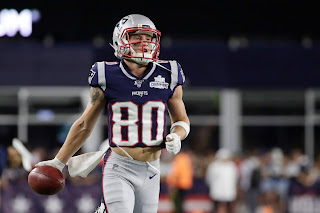 (AP Photo/Elise Amendola)\
The Patriots wrap up the afternoon game in Los Angeles with a 45-0 victory over the Chargers. They pick up their first back to back wins since the opening weeks of the season, and have won 4 of their last 5.
Holy shit. What a game. Obviously the best the Pats have looked all season. They were dominant on all 3 sides of the ball. And when I say dominant I mean DOMINANT.
To start out on offense, Cam Newton had one passing touchdown and two rushing touchdowns, tacking on 48 yards on the ground. it is kind of alarming Cam has passed for under 100 yards in back to back games, but it didn't matter in this contest. Stidham subbed in late in the fourth and passed for 60 yards and one touchdown.
Damien Harris continues to be a very efficient runner and premier back, rushing for 80 yards on 16 carries, good for 5 yards per carry.
The ball was spread out a ton today, with no one receiver putting up big numbers. A total of 9 players recorded a reception for the Patriots today. Gunner Olszewski and N'Keal Harry had a touchdown reception each.
The defense was absolutely smothering today. Three sacks were recorded by Adam Butler, Lawrence Guy, and Deatrich Wise Jr. J.C. Jackson continues to prove he is one of the league's top corners, as he picked up his seventh interception and eight turnover this season. Chase Winovich also tallied his first career interception. The Chargers have not lost by more than 10 points all season, the Patriots did a great job of exposing them all game. They were very disciplined and didn't pick up too many penalties as well.
The real highlights and turning points of the game came on special teams again. Gunner returned a punt for a touchdown, a makeup for the one he returned last week that got called back on a horrible miss call by the refs. He also took another punt back 60 yards to the 10 yard line and almost had his third score of the game. At one point he had more punt return yards than Chargers had passing yards.
Justin Bethel applied pressure on a field goal attempt, which led to Cody Davis blocking it and Devin McCourty scooping and scoring it for 6. Bethel also tipped a punt by Bailey and downed in inside the Chargers 5 yard line.
The Patriots will look to stay in the win column and extend their win streak. They will not have to travel as their next game is also in Los Angeles against the Rams, a very good and playoff bound opponent.
Twitter and Instagram @NickRufo21