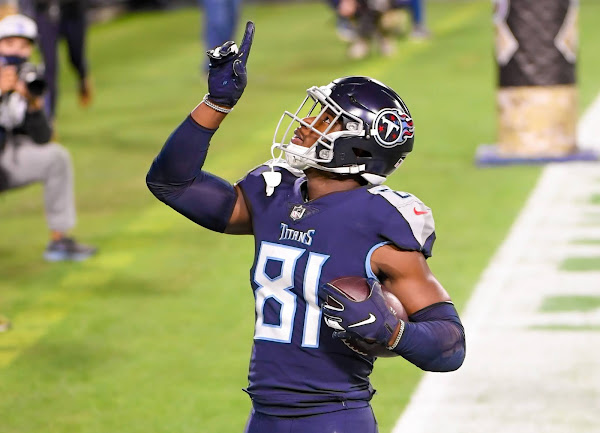 Luke Worsham/ AtoZsportsnashville The Patriots have signed former Titan's Tight End Jonnu Smith to a four year deal worth up to $50M. The contract also comes with $31.25M guarenteed. This news comes after both the addition of Trent Brown and the resigning of Cam Newton. Drew Rosenhaus reported this news to ESPN today at at 12:59 EST.


Jonnu Smith had a really good season last year posting career highs with 41 receptions, 448 yards receiving, and eight touchdonws. The second most touchdowns by a tight end this season. Jonnu Smith can really make a difference for the Patriots. It is no secret that the tight end postion has been pretty much non-existent in the recent years, and if Jonnu Smith can learn the Patriots offense he will provide. That is the key, isn't it? Smith has a task in front of him that even a guy like Chad Ochocinco couldnt handle. It's not a knock on either players, its just something to think about. Its a hard system.
At this point its unclear what Smith's cap hit will look like. With it being a four year deal, its possible that this wont affect the Pats salary cap space that much. The Patriots have already made major strides in making their offense better, even after only making two new additions.
The Pats can still make more moves to make their offense better. I haven't even started thinking about the draft yet, which the Patriots have nine picks this year. The NFL season officially starts on March 17th, 2021. It'll be interesting to see what other moves are in stake for the Pats this offseason.
Follow me on twitter: @nicseeley12