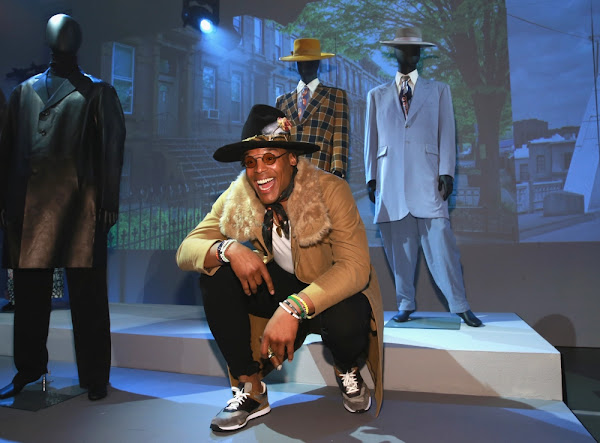 NEW YORK, NY – FEBRUARY 06: Cam Newton attends IMG And Harlem Fashion Row Host
The New England Patriots have agreed to a one-year deal bringing Cam Newton back to Foxboro. This was first reported this morning by ESPN and the Boston Globe. I can only imagine the anger of the Boston media after this after a whole season of ripping Newton for "poor performance" and also his Sunday outfits. It makes me laugh thinking of Jeff Howe and others writing about a player that they tried so hard to minimize his value to the Patriots. Even hours after the report that Newton has been resigned, Howe is still making arguments and scenarios for the Patriots to unload picks to trade up for Zach Wilson from BYU. It's Madness. Would the Patriots love to have a guy like Wilson for the future? Yes. You would be an idiot not to want him, but the never-ending narrative that Cam Newton can't win as the Patriots quarterback is tired. Bill Belichick and Josh McDaniels have the best idea of what Cam Newton can bring to this offense. To think differently is asinine. They have countless hours of film and have seen him in practice.
Cam Newton's deal was reported to be for one year and could be worth up to 14 Million dollars, with reportedly 6 million in incentives. Let's say that this is true and 100% accurate, then The Patriots would still have $50M+ in cap space. Which could mean the difference in the Patriots 2020 season going 7-9 and possibly getting back to that 10-6/11-5 type of season the Patriots organization and fans are used to.
Cam recently went on the podcast IAMATHLETE and talked about his future with the Patriots.
“Yes. Hell, yes,” he said when asked by Taylor if he would sign another one-year pact with the organization “I’m getting tired of changing. I’m at a point in my career, I know way more than I knew last year. Now you give me [a full offseason] ... They know me: Doughboy knows me, Jakobi knows me, Byrd knows me, the young tight ends know me; the younger guys that are going to come in. We’re still trying to flush out the 20 years of how it used to be.”
Cam Newton last season was 242-of-368 with 2,657 yards passing. He also threw for 8 touchdowns and 10 interceptions. Newton was also effective as a rusher, something Patriots fans hadn't seen with Tom Brady, with 592 yards on 137 attempts, 4.3 yards per carry, and 12 touchdowns.

This season Newton gets back Julian Edelman, who only played six games last season. A huge addition for the Patriots receiving group. Newton also moves into his second year with N'Keal Harry, Jakobi Meyers, and Damiere Bird. Ohh by the way... that $50M+ in cap space that could be used to bring in a wide receiver or two and a tight end. Some names that I would love to see in a Patriots uniform this year are Will Fuller, Hunter Henry, Kenny Golladay, and Curtis Samuel. The Patriots are reported to lose James White this year in free agency and I think Curtis Samuel would be a prime candidate to fill White's role. The Panthers used Samuel in both the WR and RB position this year. Also, Cam Newton played with Samuel for three seasons in Carolina before joining the Patriots in 2020.
This year is Cam's year. Patriots fans, including myself, have called for Newton's return. If the Patriots give Newton the weapons he needs to succeed, and he fails, then he has no more excuses. It could hurt his future with other NFL teams as well. I have been saying the Patriots should bring him back since week 15 of the 2020 season and I am here to tell you I told you so. However, if he flops this year it won't be a good look for him going forward. At that point come back and tell me I was wrong. I accept it.
Follow me on twitter: @nicseeley12