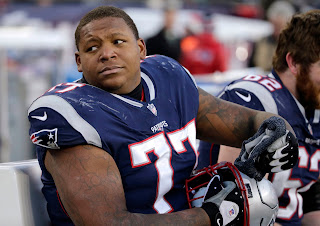 (AP Photo/Elise Amendola)
The big fella is headed back to New England.
The Patriots traded a future 2022 fifth round pick this morning for offensive tackle Trent Brown and the Raider's future seventh rounder.
Trent Brown was a former Patriot, spending one incredible year with New England on their run to the Super Bowl in 2018 before he cashed out and secured a massive contract in Oakland.
This is a monster move by New England to make in March. Brown was superb with the Patriots during his tenure, and is the prototypical left tackle any team would want. He's literally the biggest mofo I've ever seen in my life.
Not only did the Patriots win this trade outright, but they also got Brown to restructure his contract down to only $11M for the upcoming season.
The acquisition not only helps the team currently, but makes coming to New England look a lot more enticing for free agent quarterbacks in the near future. Sure you may not have the best weapons to throw to, but who doesn't want a clean pocket and to not get sacked upwards of 3 times a game? The Patriots can offer that protection.

The trade makes the starting five offensive line a little blurry though, in my opinion. If Brown goes back to left tackle, that makes Wynn the odd man out. The former first rounder has also been stellar, but hasn't stayed healthy for a full season since he's came into the league. Pro Bowl guard Joe Thuney played under the franchise tag last year and is set to hit open market, but last year's All Rookie team standout Michael Owenu will probably slot right into his position. Center and right guard are the only clear spots, locked up by David Andrews and Shaq Mason. The only situation I can think of (hopefully)
is that Wynn slides to right tackle and that bum Marcus Cannon opts for free agency too. No matter what, this is a top 5 in the league offensive line and I am incredibly excited for the return of the big fella.
Trent himself seemed pretty excited too this morning.