Meet the rest of the 2021 Patriot draft class 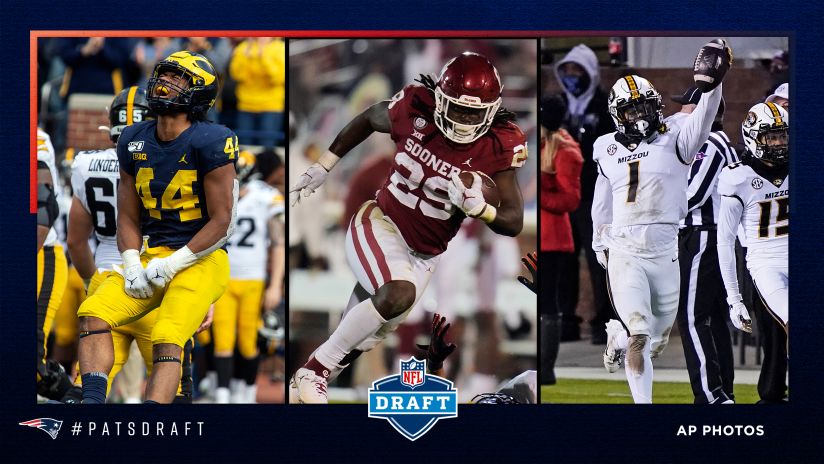 (Patriots.com)
We've covered Mac Jones, so now it is time to do a quick dive into the 7 other guys taken on days two and three of the 2021 NFL draft.
With the 38th Overall Pick: DT Christian Barmore out of Alabama. (where else)
The Patriots started out aggressive on day two of the draft, trading up eight spots to draft the defensive lineman out of 'Bama. Standing at 6'5" 311 pounds, Barmore had 37 tackles and 8 sacks in his 2020 campaign for Nick Saban's defense. Barmore will provide much needed depth to the Patriots D-Line and help with the ability to stop the run in the trenches. The Patriots traded over their second round pick and two fourth rounders to make this deal happen.
With the 96th Overall Pick: DE Ronnie Perkins out of Oklahoma.
Continuing to bolster their defense up front, New England was able to snag edge rusher Ronnie Perkins, who was able to slide all the way down to the third round. This was likely due to the fact that Perkins only played six games in the 2020 season due to a failed drug test with Marijuana. Bill Belichick had no issues rolling the dice on Perkins, because while playing in his shortened season, Perkins had 23 tackles and 5.5 sacks on the year. Perkins will join Matthew Judon and Kyle Van Noy to add a much needed pass rush that was so clearly lacking in the 2020 season.
With the 120th Overall Pick: RB Rhamondre Stevenson out of Oklahoma.
The Patriots went back to back with Alabama picks, so why not do it again with Oklahoma. Stevenson is a beast of a man standing just around six feet and weighing in at 227 pounds. Stevenson also served a suspension for Marijuana in the 2020 season, but still put up respectable numbers in his shortened year. Judging by his size, Stevenson will likely be used in redzone and short yardage situations, fitting in with the rotation of Harris, Michel and White. In his shortened 2020 season, Stevenson had 101 carries for 665 yards and 6 touchdowns. Rhamondre also has catching abilities as well, snagging 18 balls for 211 yards.
With the 177th Overall Pick: LB Cameron McGrone out of Michigan.
After taking Michigan linebackers in two consecutive years with Chase Winovich and Josh Uche, the Patriots tripled-down with Mcgrone. This is a name you might not see much of at all this year, as Mcgrone is coming off an ACL tear, so look for him to work his way into the rotation and make an impact in 2022.
With the 188th Overall Pick: Safety, Joshua Bledsoe out of Missouri.
In your typical Patriot do it all guy, Bledsoe played multiple different positions with Tigers, including linebacker, corner and safety. Over his past two seasons, Bledsoe was a ball hawk, breaking up seventeen passes in that short span. Bledsoe also made a lot of noise in the special teams side of the field, something Bill Belichick certainly takes a lot of pride in, so look for him to make an early impact on that side of the ball.
With the 197th Overall Pick: OL William Sherman out of Colorado.
This 6'3" 304 pass blocker is a very versatile young kid played at both tackle positions during his time with the Buffaloes. While it is way too early to make Joe Thuney comparisons, he certainly has his dependability, as Sherman didn't miss a single game in his last three seasons.
With the 242nd Overall Pick: WR Tre Nixon out of UCF.
Last but not least, the Patriots went with a late round receiver (sound familiar?). Nixon played for both Ole Miss in 2017 and transferred to UFC where he played from 2018-2020. In his 2019 campaign, Nixon hauled in 49 receptions for 830 yards and 7 touchdowns. Holding a 4.44 40 yard dash time, Nixon will likely be starting his professional career on the special teams side of the ball, but New England is certainly the place to warrant real playing time by proving yourself on special teams.
Well there is your quick dive 2021 Patriot draft class. Welcome to Foxboro boys, we look forward to seeing you this year.