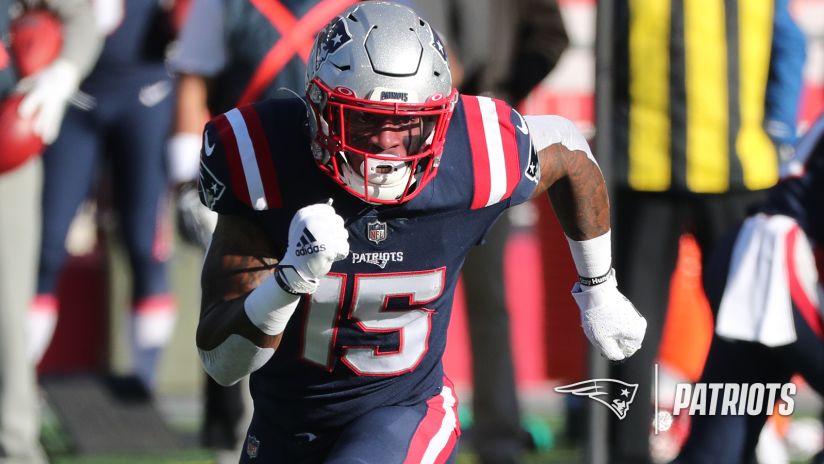 (Patriots.com)
Patriots made some headlines today surrounding two of their younger players, as rookie QB Mac Jones signed a 4 year deal with a 5th year player option worth up to $15.6 million, and 3rd-year wideout N'Keal Harry has formally requested a trade from New England.
Lets start with the statement released by N'keal's agent.

"For the past several months, I have been working in cooperation with the Patriots behind the scenes to put a plan in place to allow N'Keal to thrive in New England. Through two seasons, he has 86 targets, which obviously hasn't met the expectations the Patriots and N'Keal had when they drafted a dominant downfield threat who was virtually unstoppable at the point of attack in college. Following numerous conversations with the Patriots, I believe it's time for a fresh start and best for both parties if N'Keal moves on before the start of training camp. That is why I have informed the Patriots today I am formally requesting a trade on behalf of my client," agent Jamal Tooson said in the statement.

"N'Keal understands a key ingredient to production is opportunity. He will continue to work hard to develop and refine his craft after missing a large portion of his rookie year to injury. His draft-day expectations for his NFL career have not changed. We are confident success is just around the corner for him and will aggressively pursue it."

The Pats selected Harry 32nd overall in the 2019 NFL Draft, and expectations were high for the young wideout from jump. History has shown that the Patriots have had their struggles drafting receivers and N'keal was no different. Selected for his big build and playmaking ability, it looked like Harry would be used in a lot of jump ball type plays where he would dominate smaller defenders. Unfortunately, his rookie season was cut short due to injury and Tom Brady left for Tampa the following year.
Last season was far from the breakout year that we were expecting, as he only hauled in 33 receptions for 309 yards and 2 touchdowns. A lot can be said for the offenses production last season and certainly shouldn't be placed on on Harry, but needless to say both sides are unhappy with his production. Injuries and the advantage of hindsight really soured Patriot fans view on Harry, as breakout stars like DK Metcalf and A.J Brown were selected after him, but I was personally ready to blindly support Harry for one more season. It's always tough to judge a young guy when his rookie season is cut short, but multiple reports gave the impression that Harry just isn't a good fit scheme wise in New England. I have no doubt that he has big play ability and can make his own plays in the secondary, but that just really hasn't been the style here for awhile. I'm not really optimistic on Harry's trade value at this point, but anything above a 4th round pick would seem like a win to me.
In more positive news, the Patriots and Mac Jones inked a 4-year deal today worth up to $15.6 million. This deal also includes a fifth-year option. Selected 15th overall in this years draft, it was no surprise that the deal happened, it just had some fans worrying why it was taking so long. Luckily, this is nothing out of the ordinary, as first overall pick Trevor Lawrence just signed his deal over the weekend.
So while it looks like one new Patriot is in and another might be out, but that just is the nature of the NFL.