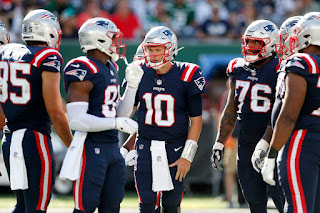 (Jim McIsaac/Getty Images)
The Patriots fall to the New Orleans Saints this afternoon by a score of 28-13.
This was one of those games that the Patriots were bound to lose from the start, but they remained within striking distance just to get your hopes up.
The defense played well as usual, allowing only 7 points up until the fourth quarter. Consecutive 3 and out stops gave the team hope in the second half but the offense could never put any points on the board.
Mac Jones looked very poor. The rookie struggled, throwing 3 picks total on the day. One of them being a pick six. It didn't help that the offensive line allowed numerous sacks and pressure today.
High note of the day was Jones and Bourne connecting for a stellar lob touchdown in which Bourne tiptoed his way into the endzone, somehow staying in bounds.
Damien Harris, who was a major piece in last week's victory, was nowhere to be seen today. Instead the Patriots settled for piss poor performances from J.J. Taylor and practice squad legend Brandon Bolden. Neither of them could help out this team's devastating offensive performance today.
The Patriots welcome back Tom Brady in his first return to New England in what should be one of the most memorable games of our lives. The Buccaneers will probably end up destroying us, so get ready for the media to crucify Belichick for the next two weeks. Should be a lot of fun.
Twitter and Instagram @NickRufo21