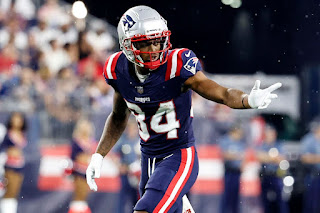 (Fred Kfoury)
The Dallas Cowboys came into New England this Sunday and walked out with a late 35-29 victory over our Patriots.
Dallas on paper dominated this game, with over 500 total yards, but somehow New England stuck in there long enough.
With the bend don't break attitude, the Patriots forced multiple turnovers, and made long Dallas drives end in 3 points instead of 7.
New England looked like they were going to run away with the win, after a 75 yard 1 play touchdown drive on a pass to a wide open Kendrick Bourne with 2 minutes of play left. But in the closing seconds the Patriots defense allowed too many yards to gun slinger Dak Prescott. Dallas gained 24 yards on a 3rd and 25 play to set up Zuerlein for a game tying field goal.
New England received ball to start OT and got cucked by a missed facemask call. A turnover on downs allowed Dallas to keep their elite offense rolling and score rather quickly.
Besides the disappointing result, the team continues to show hope. Much like last year, they contend in games they are not meant to, and play down to opponents they are supposed to clearly beat.
Week in and week out you do not know which team is going to show up. The team that lost at the buzzer to defending Super Bowl Champions, or the team that almost loses to 1 win Houston with a backup quarterback.
New England will look to get back in the win column with another hopefully easy matchup against the Jets next Sunday.
Twitter and Instagram @NickRufo21