Patriots Performers of the Game (Week 8) 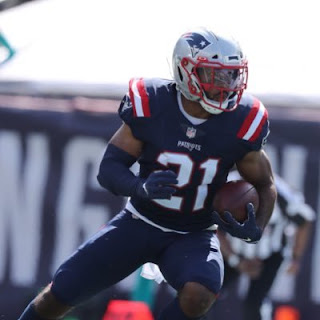 The Patriots pulled out an underdog win this past Sunday against the Los Angeles Chargers by a score of 27-24. This was their 20th win in their last 23 meetings. Here are the standout performances.
Adrian Phillips
Phillips was by far the player of the game. The defensive swiss army knife recorded 2 picks off of Justin Herbert,  returning one for the go ahead touchdown late in the game. The former Charger also picked up 3 tackles.
Matthew Judon
Judon continues to be one of the best offseason acquisitions. He added a sack and a half to his season total, while also recording 5 QB hits and 10 hurries. One of the most dominant edge rushers has been so much fun to watch in a Patriots uniform.
Damien Harris
Harris had the lone touchdown for the offense, and racked up 80 yards on 23 carries. The workhorse would have had another TD and a lot more scrimmage yards if it weren't for two big plays getting called back for holding.
Nick Folk
Mr. Consistent keeps on drilling kicks. Folk went 4/4 on field goals with a long of 48 and converted his only XP attempt. He has really been making me eat my slander from last year.
New England travels cross country for a 1 p.m. matchup with the Carolina Panthers this coming Sunday.
Twitter and Instagram @NickRufo21