Patriots Players of the Game (Week 9) 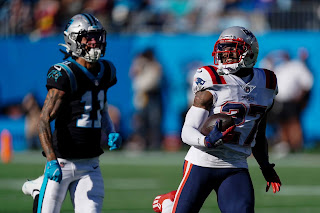 (AP PHOTO/John Bazemore)
New England cruised to an easy road win against the Carolina Panthers yesterday. The defense sparked most of the action from the Patriots. At the top of the list for stars of the game was cornerback J.C. Jackson. Jackson recorded 2 interceptions, adding to his monstrous total in his career. He also returned one of those picks for a touchdown. Easily a top 3 corner in the NFL, J.C. continues to be the life of the defense and each game it gets crazier that he was snubbed from Pro Bowl and First/Second team rosters.
Linebacker Jamie Collins recorded the third pick off Sam "Seeing Ghosts" Darnold in a spectacular feat of athleticism and awareness. Collins snagged a pass out of mid air at the line like a magician.
On the offensive end, the Patriots were lead by Damien Harris who rushed for his 6th touchdown in the last 5 games. Hunter Henry also caught a TD pass, adding to his total this season.
The highlight plays and stuffed stat sheets were minimal this week. In other news, Jakobi Meyers now has the most receiving yards in NFL history without recording a touchdown reception (1,522). It's even crazier that he has thrown for 2 touchdowns before catching one. Here's to hoping Jakobi can get in the end zone one of these coming weeks, starting with next Sunday against the Cleveland Browns.
Twitter and Instagram @NickRufo21